Al Dliw recognized as July Fellow of the Month

Al Dliw recognized as July Fellow of the Month

HUNTINGTON, W.Va.— Majdi Al Dliw, M.D., a pulmonary fellow at the Marshall University Joan C. Edwards School of Medicine, has been selected as the July 2016 Fellow of the Month, announced Paulette S. Wehner, M.D., vice dean for graduate medical education at the school. 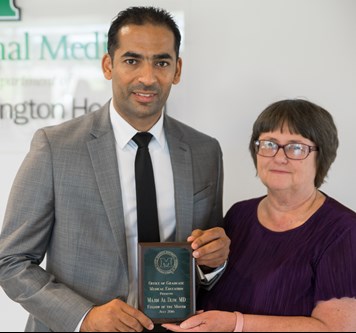 “Even though he is known as an excellent physician, it was Dr. Al Dliw’s compassion for others that made him an exceptional nominee for the Fellow of the Month,” Wehner said.   “His nomination letters outlined his immense compassion for others and how it extends well beyond the patient’s room.  Dr. Al Dliw is also well known for being an excellent teacher and volunteering to hold special teaching sessions on ultrasound for residents and students.  He has a distinguished ability to display altruism, compassion, enthusiasm and insight to be a perfect role model for all.”

As part of his recognition as the July Fellow of the Month, Al Dliw will receive items including a Certificate of Recognition and a designated parking spot.