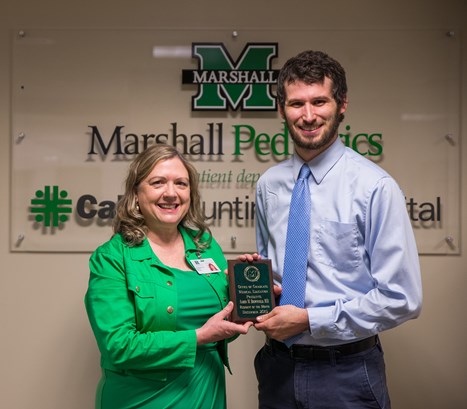 HUNTINGTON, W.Va. — Second-year pediatrics resident Aaron M. Brownfield, M.D., has been selected as the December 2015 Resident of the Month at the Marshall University Joan C. Edwards School of Medicine.

In announcing the selection, Paulette S. Wehner, M.D., vice dean for graduate medical education, praised Brownfield for his ability to work with others.

“One of the nicest things about this Resident of the Month program is that it gives us an opportunity to recognize residents for something they do every day,” Wehner said.  “This month’s recipient, Dr. Brownfield, is a prime example.  He is recognized for being a successful peer mentor – an every-day activity.  Yet, the role of being a peer mentor during residency is critical since that person guides others in professional development throughout the year.”

Brownfield was nominated by Casey Patick, M.D., a first-year pediatrics resident, who wrote, “Dr. Brownfield is a resident I really look up to. He goes above and beyond for his patients to give them the best care they can receive. He puts a lot of thought and consideration into everything he does. I really respect him and his outlook as a physician.”

Brownfield earned his medical degree from Marshall in 2014 where he received Commendation for Exceptional Ability in Attitude, Enthusiasm, and Professionalism in child and adolescent psychiatry.  He also received the Community Leadership Scholarship awarded to one incoming medical student and renewable based upon demonstrated leadership in character and compassion towards others through community service projects.  Brownfield’s commitment to service ranges from mentoring at-risk youth in the Huntington area to working at an orphanage in Haiti for six weeks.

A native of Huntington, he graduated from Marshall University with a bachelor’s degree in biology.

As part of his recognition as the December Resident of the Month, Brownfield will receive items including a Certificate of Recognition and a designated parking spot.