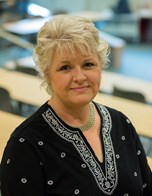 “I'm very excited about Ms. Amy Smith for this position,” Shapiro said.  “She has a terrific connection with our students; in fact, during the search process students spontaneously came together to endorse her candidacy. She is also a dedicated and caring teacher who understands the unique mission of our medical school.   I couldn’t be more pleased that she has taken on this expanded role with the school.”

Since 2009, Smith has worked at the School of Medicine as the assistant director of medical education, specifically directing the clinical skills center and standardized patient program. Prior to joining the school, she served as the director of women’s and children’s services at Cabell Huntington Hospital, as well as nurse manager for the neonatal intensive care unit at CHH.

“I would like to thank the search committee and Dr. Shapiro for allowing me to serve in this position,” Smith said. “I feel very humbled and blessed to be given the responsibility to work with a team of outstanding faculty, staff and administrators that will work together to meet the needs of the medical students.  I am looking forward to moving future physicians into the next chapters of their lives.”

She serves on various committees at the School of Medicine including Admissions, Curriculum, Multicultural Advisory and Interprofessional Education.   Smith received the Student Appreciation Award in May 2012 and the Dean’s Award for Excellence in Collaboration in 2014.

Smith is married to Terry Smith of Milton and they have two children, Sarah and Brad.