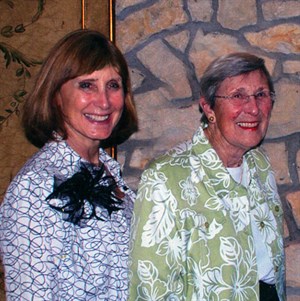 The Dr. Dorothy E. Hicks Scholarship will be awarded to a first-year medical school student who is a resident of West Virginia. The award is renewable for three additional years pending normal academic progress.

Hicks, whose generosity has led to the creation of eight scholarships at the university, says she decided to make the gift because of the outstanding medical care she received at Marshall and to honor her former student and mentee, as well as longtime friend, Linda S. Holmes.

“Everyone at the School of Medicine and Marshall Health has been so helpful to me,” Hicks said. “I was in a position to assist and thought developing a scholarship at the SOM would be a good way for me to give back to the academic program while at the same time honoring my good friend, Linda Holmes.”

Holmes, who serves as the director of development and alumni relations at the SOM, praised Hicks for her outstanding contributions to Marshall.

“Dr. Hicks has touched my life in so many areas and for her to honor me with creating a scholarship is extremely meaningful on a personal and professional level,” Holmes said. “She genuinely bleeds green and loves the school. Everyone at Marshall has benefited from her leadership and generosity.”

Hicks retired as a faculty member in 1999 after 30 years of service as a professor of education and coordinator of clinical supervision of teachers.

While at Marshall she also coached women’s golf, tennis, badminton and volleyball and served as chair of the women’s physical education department. She helped develop the women’s intercollegiate athletic program and served as an associate athletic director. She also was faculty representative for the Association of Intercollegiate Athletics for Women and for the Southern Conference, of which Marshall University is a former member.

The women’s softball field at Marshall is named in honor of the former coach.