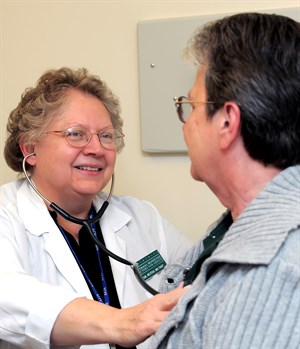 HUNTINGTON, W.Va.—Dr. Shirley M. Neitch, a professor of geriatrics in the department of internal medicine at the Joan C. Edwards School of Medicine, and a team of Marshall University researchers recently published an article on the effects of prolonged power outages on the health care of elderly patients who are bedridden.

The article also includes information about two underutilized resources available across much of the nation and a tip sheet for health care providers and caregivers.

The study, published last month in the peer-reviewed journal Clinical Geriatrics, highlighted two cases following the 2012 derecho—an intense, widespread, and fast-moving windstorm—which left millions of people without electricity for days across much of the mid-Atlantic United States.

“Our article described two cases where patients who were bedridden developed complicated and irreversible pressure sores after being without power for several days,” Neitch said. “The first case patient previously had intermittent but minor problems with skin breakdown, and the second case patient had no previous skin issues. We speculate that the adverse environmental conditions resulting from the power outage were primarily responsible for these patients’ pressure sores.

High humidity and excess sweating led to an increase in moisture on their skin. It was likely difficult for their caregivers to keep them clean and dry in the absence of electricity for light, air conditioning, and heated water.”

Both patients cited in the case studies eventually died and it is believed the pressure sores contributed to their deaths.

Neitch and her team of researchers say their case studies underscore the need for continuous power service for all bedridden patients, particularly if they are on mattresses that require electrical power. She says it is important to note that most power companies do offer high-priority restoration status, but documentation must be completed with the assistance of health care providers.

“We know that it’s impossible for power companies to guarantee continuous service or early restoration to all who need it,” Neitch added. “Therefore, it’s imperative for the medical community and other community agencies to be aware of all services available to at-risk populations when these weather emergencies occur.”

Neitch says physicians know well that patients in emergencies will likely call 911, and they likewise need to know that patients in need of assistance should be informed about 211 for help in locating the services they need. Local health department agencies can be contacted to determine if the 211 system is available.

Additionally, the research team , with the help of Clinical Geriatrics and HMP Communications, developed a Patient Tip Sheet for health care providers and caregivers for elderly patients to provide important information for weather and emergency preparedness.