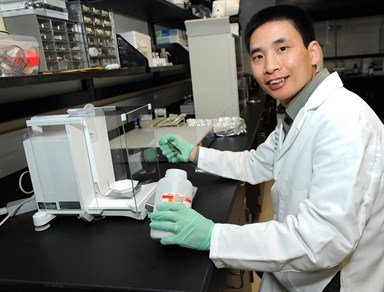 HUNTINGTON, W.Va. – Dr. Miaozong Wu of the Center for Diagnostic Nanosystems at the Marshall University School of Pharmacy has been awarded a $750,000 grant from NASA to lead a team of researchers investigating the muscle and bone loss associated with space travel.

Wu’s three-year project was one of only 14 funded nationally through NASA’s Experimental Program to Stimulate Competitive Research (EPSCoR). According to Dr. Majid Jaridi, chairman of the NASA West Virginia EPSCoR Committee, which coordinates the grant proposal process in West Virginia, researchers in 29 states were eligible to compete.

“Marshall University has had a track record of success in winning these grants. The program is quite competitive and this latest award is a great achievement for the team,” Jaridi added. “I look forward to working with them to get the project started.”

Wu said, “The loss of muscle and bone observed with space travel is an important and vexing problem, and NASA has put a high priority on identifying risk factors and treatments. It was really exciting news to get this award. We have a great team ready to get to work.”

Wu explained that the researchers will have three primary objectives—to study the effects of space travel on the body’s muscles and bones, to identify possible causes and to develop potential treatments.

“The lack of gravity and the exposure to increased radiation in space are believed to be related to musculoskeletal loss, but very few studies have been done,” he said. “Our findings will have direct applicability not only to NASA personnel traveling in space, but also to anyone who is experiencing muscle and bone loss, including aging patients and those suffering from cancer, AIDS and diabetes.”

Wu added that the project will involve undergraduate and graduate student researchers, and endocrinology physician fellows from the Department of Internal Medicine’s Endocrinology Fellowship Program.

“An important component of this particular NASA program is to train students for science and other high-tech careers,” he said. “We will be giving them hands-on opportunities to do significant research associated with this study.”

Dr. Kevin Yingling, dean of the School of Pharmacy, congratulated Wu and his colleagues for the award, saying, “This project will further the team’s partnerships, significantly increase the state’s research and development capabilities, and support both our educational mission and economic development in the region. It’s really a win-win.”

Dr. Miaozong Wu of the Marshall University School of Pharmacy is leading a team of researchers studying the muscle and bone loss associated with space travel. The project is funded by a recent $750,000 grant from NASA’s Experimental Program to Stimulate Competitive Research. Photo by Rick Haye, Marshall University