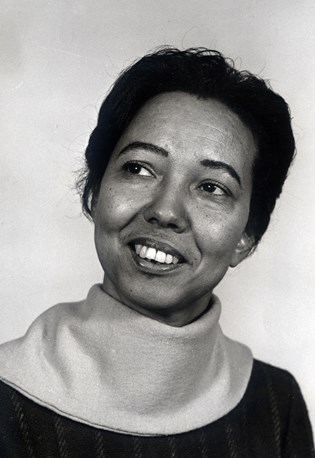 Mildred Mitchell-Bateman, MD, was a remarkable woman and psychiatrist who many may know by the state hospital that bears her name. It is very appropriate to honor Dr. Mitchell-Bateman for her contributions to mental health, the state and to Marshall University’s Joan C. Edwards School of Medicine. Dr. Mitchell-Bateman decided to become a physician at age 12, while working with Red Cross workers caring for tornado victims. She graduated from Women’s Medical College of Pennsylvania and trained in psychiatry at the Menninger Clinic. She became superintendent at Lakin State Hospital in West Virginia, a psychiatric hospital established for African Americans, where she developed innovative programs for patients who were deemed hopeless cases and promoted treatments with psychosocial rehabilitation. In 1962, she became the first African-American woman to run a state department, serving as the director of the West Virginia Department of Mental Health. In that role, she began a number of programs to advance the care of West Virginia’s mentally ill. In 1973, she became the first African American woman to hold an office in the American Psychiatric Association, serving as vice president. Then, from 1977 to 1982, she served as founding chair of the Department of Psychiatry at Marshall University. She developed a strong department with a focus on the education of medical students, and arranged for the students to have clinical rotations at what was later to become her namesake, the Mildred Mitchell-Bateman state hospital.

Dr. Mitchell-Bateman passed away in 2012 at the age of 89. She was well known as an exceptional teacher and sought to teach others to treat psychiatric patients with respect and dignity. Speaking with those who knew her well, she has been described as a humble, tireless and passionate advocate for those with psychiatric disorders.

Following in the footsteps of Dr. Mitchell-Bateman as the current chair of the Department of Psychiatry and Behavioral Medicine at Marshall University, our department strives to follow her passion to improve the lives of patients with mental health disorders. With the creation of new training programs for psychiatry, child and adolescent psychiatry as well as geriatric psychiatry, I am sure Dr. Mitchell-Bateman would be pleased to see her legacy continue through Marshall Psychiatry.

Dr. Mitchell-Bateman didn’t enter psychiatry to be a pioneer or break through racial or gender divides in mental health. Her determination and aspirations were rooted in a steadfast commitment to both treat and advocate for her patients. Those are the qualities we train our residents and medical students to embody. We can all learn from the life and legacy of Dr. Mildred Mitchell-Bateman.

Dr. Mildred Mitchell-Bateman was born on March 22, 1922. Today would have been her 99th birthday.

Dr. Suzanne Holroyd has served as professor and chair of psychiatry and behavioral medicine at the Marshall University Joan C. Edwards School of Medicine in Huntington, West Virginia, since 2014.